Home > Blog > How Did Early Americans Take Care of Their Teeth, Part II

How Did Early Americans Take Care of Their Teeth, Part II 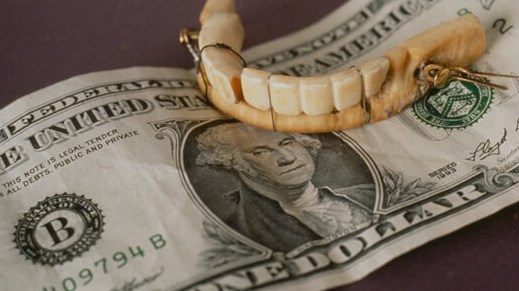 Contents hide
1 The fascinating – and sometimes scary – history of dental care in America, from floss to mouthwash to dentures.
2 When Was Floss Invented? And What Was it Made of?
3 When Was Mouthwash Created? And Who Created it?
4 What Did Early Americans Use for Dentures?
5 How Did Early Americans Treat Toothaches?
6 Family-Friendly Dental Care for the Modern Age
6.1 Keep Reading

The fascinating – and sometimes scary – history of dental care in America, from floss to mouthwash to dentures.

From battery-powered toothbrushes with two-minute timers to powerful water-flossing devices, we’ve got all the fancy tools we need to take care of our pearly whites in this day and age. And getting a problematic tooth taken care of is as simple as taking a trip to the dentist.

But in reality, dental care like this only developed within the past sixty to eighty years. So, how did early Americans take care of their teeth before all these modern advancements?

In part I, we talked about how early Americans brushed their teeth before the invention of toothbrushes and toothpaste, how they handled dental emergencies, and the creation of the first toothbrush.

Today, we’re going back in time to discover when floss and mouthwash were invented, the history of dentures, and what early Americans used to treat toothaches.

With Thanksgiving coming up, we thought it would be fitting to share some fun, interesting facts about how early Americans cleaned up after turkey dinner.

Some of what you’ll learn is captivating and still applies to this day, and some of it is just downright revolting.

They say sequels are never a good idea, but there are exceptions to every rule. So, let’s jump into part II!

When Was Floss Invented? And What Was it Made of?

People have been flossing for millennia, and they found plenty of creative ways to do it over the years.

At the beginning of the 19th century, a dentist from New Orleans named Levi Parmly  brought flossing into the spotlight. He stressed the importance of flossing to all his patients, calling it the best way to prevent dental health issues.

Parmly invented the first modern form of dental floss using waxed silken thread. And because of his valuable research in the field of dentistry, he went on to become the most renowned dental practitioner in the southern United States. His ideas about the causes and prevention of oral health conditions still influence how dentistry is practiced even today.

Despite Parmly promoting the widespread use of dental floss, it wouldn’t become a commercially available product until 1882. A company called Codman and Shurleft played off of Parmly’s model and began mass-producing unwaxed silken thread for consumers everywhere.

Then, a little company you might have heard of called Johnson & Johnson stepped in, releasing their first floss in 1896. Two years later, they became the first company to patent their dental floss, which was made out of the same type of silk used for sutures at the time.

Although it was widely produced, Americans wouldn’t fully adopt flossing into their dental care routines until World War II.

All of this backstory is interesting, but it’s worth noting that monkeys have been spotted flossing using feathers and even human hair. So, who’s to say our primitive ancestors aren’t the real pioneers?

When Was Mouthwash Created? And Who Created it?

If you’re not a fan of Listerine, you might develop a newfound appreciation for it after this.

Before we touch on what early Americans used for mouthwash, we’re going to wind the clocks back a bit further.

The ancient Romans had an interesting mouthwash “formula” that was popular over two thousand years ago. Whenever it was time to rinse, they would use either animal or human urine to wash their mouths out.

And the craziest part? It worked! The ammonia found in the urine acted as a disinfectant and whitening agent.

Listerine doesn’t sound so bad now, does it? The real question here is: Who came up with that idea!?

Thankfully, mouthwash has come a long way since then.

Before the settlers arrived, Native Americans used to harvest the roots of the Coptis Trifolia, or gold thread cypress tree, to create mouthwash. The gold thread tree contains an alkaloid called berberine that acts as a pain-reliever, making it a useful tool for treating painful dental issues and sore throats. They also harvested Witch Hazel to use as a mouth rinse.

The first medical-grade mouthwash was invented by Dr. Joseph Lawrence in 1879, although he didn’t create it for that purpose.

Lawrence made an antiseptic formula to sterilize surgical tools using eucalyptol, menthol, methyl salicylate, thymol, and alcohol. He named it after Dr. Joseph Lister, the pioneer of antiseptic surgery. And if that name sounds familiar, it should, because we’re talking about the most popular mouthwash on the market: Listerine!

But at the time, Lawrence didn’t market Listerine as a mouthwash. In fact, he sold it as just about everything but mouthwash. Lawrence pitched Listerine as an all-purpose disinfectant, a cure for the athlete’s foot, and even a dandruff remedy.

Listerine’s dental potential wasn’t discovered until 1895 when dentists across America started to adopt it as a decay-fighting antiseptic. By 1914, it finally became available over the counter, and the rest is history.

But unfortunately, Listerine was one of the few effective products on the market during those days. Due to the lack of regulations back then, many other mouthwash formulas caused severe damage.

Ex-Cel Tooth Stain Remover, Bleachodent, and Snowy White contained hydrochloric acid in their formulas, and Tartaroff was proven to erode 3% of users’ enamel per each use.

What Did Early Americans Use for Dentures?

This might surprise you, but George Washington didn’t have wooden dentures. Full wooden dentures were most popular in Japan, where they were invented in the 1500s.

When he took office for the first time, Washington’s dentures were made out of elephant and hippopotamus ivory, both of which were popular denture materials at the time.

Before that, he had dentures made with real human teeth! Looters and scavengers often extracted these teeth from soldiers’ bodies on the battlefield, commonly referred to as “Waterloo dentures.”

In 1850, a hardened rubber material called Vulcanite was introduced that replaced gold as the base. This reliable rubber, combined with porcelain teeth, made it the most reliable set of dentures to date.

Acrylic resins and plastics took over at the beginning of the 20th century and have evolved into the smile restorative solutions we have today.

How Did Early Americans Treat Toothaches?

Having a toothache is enough to drive anyone up a wall. The pain can be so intense it can ruin your whole day. But today, you can make a quick run to the drugstore for some over-the-counter painkillers or make an appointment with your local San Diego dentist to get the issue  taken care of.

If the same fate befell one of our predecessors, they wouldn’t be so lucky. Without any advanced medical remedies, how did they get rid of their toothaches?

As we discussed earlier, the Native Americans used the gold thread tree’s root to make mouthwash. Additionally, they would often rub this naturally numbing solution on teething babies’ gums to ease their pain.

They also made use of another plant called the Southern Prickly Ash tree. This thorny relative of the orange tree contains a naturally-occurring novocaine, which they used to numb the aching tooth. The Prickly Ash tree came in handy before and after tooth extraction, keeping the patient as pain-free as possible throughout the process.

Looking back, it’s easy to appreciate how convenient and pain-free dental care is now. It wasn’t that long ago that we were using hydrochloric acid as mouthwash. We’ve come so far in such a short amount of time, and technology keeps improving every year.

At Dental Express, we have a passionate appreciation for all the incredible dental technology at our disposal, and we’re proud to use it in service of giving you the smile you’ve always wanted.

If you want friendly, affordable dental care this holiday season,  make an appointment at one of our six locations today. And if we don’t see you this week, we wish you and your family a lovely Thanksgiving holiday filled with love and lasting memories.

How Early Americans Took Care of Their Teeth, Part I

Would You Let a Barber Pull Your Teeth? A Brief History of Dentistry

Did George Washington Have Wooden Teeth? A Brief History of Dentures

Why Does My Tooth Hurt? Four Reasons for a Severe Toothache